A look at the top superabsorbent polymer makers in the world 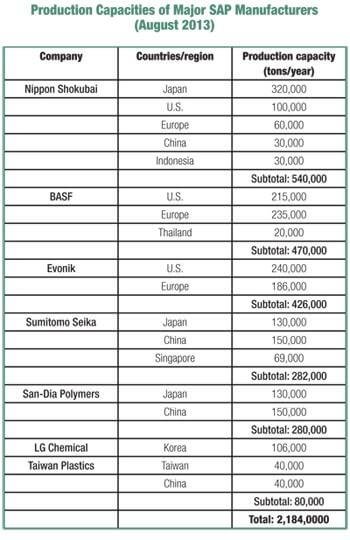 Table one shows the production capacity of the world’s largest producers of superabsorbent polymers in the world. The total production of seven companies on the list totals nearly 2.2 million tons as of August 2013. In spite of the increased capacity of 14.2% in April 2012, demand for SAP outpaces supply globally.

This shortage can be partially attributed to an accident at Nippon Shokubai’s Himeji workshop in 2012 that subsequently led to the shutdown of 320,000 tons in September 2012. Although a portion of this operation was restarted in June 2013, it is currently only able to make 180,000 tons per year. To compensate for this shortage, Nippon Shokubai accelerated its expansion in Tennessee, adding 40,000 tons last year and bringing its total U.S. capacity to 100,000 tons. The company also makes 60,000 tons of SAP in Texas.

Nippon Shokubai has also been expanding its Far East presence with a 90,000-ton plant in Indonesia. So far about 30,000 tons of that capacity is up and running.

Capacity expansion among the industry’s other leading players includes expansions in Japan and Europe by Sumitomo Seika and expansions by LG Chemical in Korea.

The biggest application for SAP makers is the diaper and every manufacturer of SAP has a strong relationship with at least one major diaper maker. However, the global expansion of diaper demand has tightened supply of SAP materials and this added with the reduction of Nippon Shokubai’s output has weakened these relationships. Diaper manufacturers are not getting enough materials from their main supplier, forcing them to establish relationships with other suppliers, intensifying competition among the SAP manufacturers and diaper manufacturers to get the SAP materials. This situation should be partially reversed as Nippon Shokubai’s capacity comes back onstream.